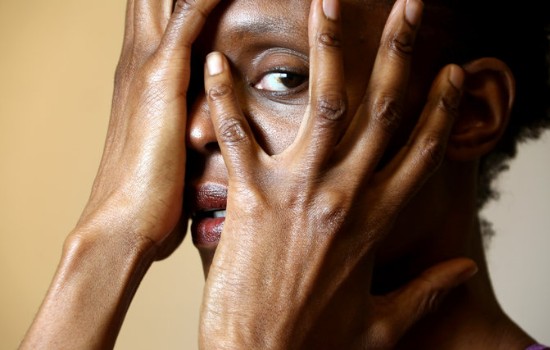 Okwui Okpokwasili is a performer and writer based in Brooklyn, NY. She works across performance disciplines and genres.

She wrote, choreographed and performed in a run of her original work, Pent-Up: A Revenge Dance at PS 122 for which she received a 2010 Bessie Award for Production. Described as “ruthlessly clean and clever” by Helen Shaw of Time Out NY, Pent-Up is an exploration of cross cultural collisions. A mother and daughter attempt to construct identity out of fragments and memory, through competing narratives and broken gestures. The New York Times has described her as “incandescent”.

Her work in multidisciplinary performance is best exemplified by her ongoing artistic collaboration with Ralph Lemon, the Bessie Award winning Artistic Director of Cross Performance. She just completed the 2010 tour of his latest work How Can You Stay… In January of 2011 performed a duet with Ralph in the Atrium at MOMA as part of the exhibit ,On Line: Drawing Through the Twentieth Century. Okwui also received a Bessie Award for her performance in the final part of Ralph Lemon’s Geography Trilogy, Come Home, Charley Patton.

For the 2008 Prelude Festival , she and frequent collaborator Peter Born created an installation where she placed herself in a pitch dark box that mimicked the makeshift shacks of roadside dwellers in Nigeria. Audience members were led inside one at a time to be with her alone in complete darkness as a narrative unfolded onstage about a missionary’s failed conversion effort and entanglements in a village in West Africa. This installation was concerned with disrupting received narratives about Africa, and the persistence of the conflation of fetish objects and African bodies in the Western imagination. They attempted to replace the act of looking at an “African” object with the act of breathing with an unknown, unseen figure in the darkness and making a space for the viewer’s inward reflection. This also served as an extension of thematic concerns surrounding Pent-Up: A Revenge Dance.

She also performed in the Dean Moss/Laylah Ali collaboration, Figures on a Field, which premiered at the Kitchen in the spring of 2005, and went on to Mass MoCA in 2006.  Also in 2006 she was selected as a FUSED- French US Exchange in Dance – artist, where she was given a three month residency to develop Pent-Up: A Revenge Dance through Centre National de la Danse in Pantin, Paris.